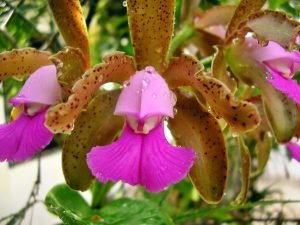 Adam and Eve oil is an old Hoodoo formula that is used for attraction and reconciliation.  It has somewhat fallen out of fashion because one of its main ingredients or companion charms, Aplectrum hyemale, is now endangered.  The orchid root where the ashe of the charm is channeled has a round part and a phallic part, and the tubers contain a very sticky putty that is said to have been used by the Catawba as a pain medicine, and to repair pottery.  It is very strong and waterproof.  So Adam and Eve root is also called putty root.

Like Eve was shaped from Adam’s rib, A. hyemale propagates when the Adam part of the plant separates from the Eve part of the plant, and then a new one grows.  So one can understand why this was a popular ingredient for love and attraction.  It helps people stick together and grow back into a couple after parting.

Since picking it is illegal in most places now, and it is actually endangered, probably from over-harvesting, you should only get it from someone who cultivates them.  Try to get it from a plant grower who is a part of a happy relationship, and fed it with real enduring love energy.

If you can’t find it, there are substitutions.  I am told that a popular one is a Job’s tear and balsam root pairing.  This may work okay, but for me, it’s lacking the orchid’s mortality consciousness energy.  It says peace, love, and happiness, but doesn’t have enough ” …’til death do us part…”  For the less spoiled nose, this substitution also lacks that special subtle aroma.  It should also be something that already is or becomes sticky with water.

So my best pick for a substitution is a root and bulb of an Orchis mascula or Orchis militaris.  In making the oil, you can also use a packet of sahlab powder.  Sahlab is a middle eastern drink or dessert made from orchid roots.  Worst case, it’s mixed with some rice or potato starch, which is not a bad thing as they carry energy of prosperity and plenty.  Potato is also a member of the same plant family as belladonna.  So there is the added energy of allure.

After making offerings to your Gate Keeper, Ancestors, and Love Deities, pick a nice evening when the moon is new or waxing, and lay out your ingredients on your altar or workspace.

Burn some incense for your deities, and either sing a love song or turn on some lovemaking music.

Let some of the smoke of the incense into the jar.

Sing the purpose of the oil into the jar so that you feel the vibrations of your voice in your hand.

Add the ingredients into the jar mindfully.

Let the lid of the jar get some smoke, and sing to it before closing it.

Give the jar a good shake as you dance with it.

When it feels like enough, wrap the jar with the cloth and keep it in a cool, dark place for 5 months.  It may be helpful to mark it with its “conception” and “birth” dates.

Adam and Eve With Essential and Fragrance Oil Version

Though some would say it is less “authentic”, there is some usefulness in the more modern versions of Adam and Eve oil.  It smells wonderful, and if you don’t need to be extremely discreet, why not?  Most recipes out there are a bit vague for my taste, so I developed one that would actually do the job as well as the infusion oil, just smell fancier.

Even better, you can make the infusion oil version, and then add apple, rose, and orchid fragrance oils to it.  This is something I often do for clients.  You can also mix it with compatible condition oils. 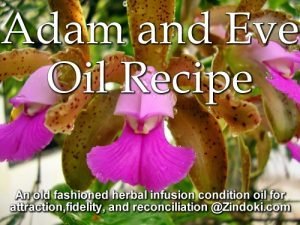