Nya Si We and Efin We – Steam and Smoke Baths 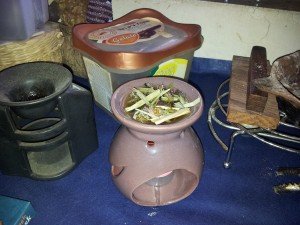 Yoni steaming has become a trend lately, but it is a very old practice that has been done for thousands of years throughout Africa, Asia, and the Americas.  Though some scientists and skeptics say that it doesn’t have any medicinal value, practical health professionals generally know better.  Heat is good for you, light is good for you, steam is good for you, and sometimes smoke is good for you too.  How they should be applied depends, like most medicinal practices, on the situation and condition being treated.  Also, if it is done specifically for medical reasons, it should be done by a doctor or under a doctor’s supervision.  Even if it’s done for spiritual/energetic reasons, you should ask your doctor if such practices would be harmful for you.  People with diabetes should be especially careful of anything that could possibly mess with body temperature or make the skin vulnerable.

Before we get into the how-to, I’d like to give an African diaspora perspective on the why.  As we know, medicine and medicinal plants belong to Erinle and Osanyin.  Different groups designate different types of medicine to each, and in the east coast of the U.S. some of us tend to assign more surgical procedures to Erinle, while we go to Osanyin for potions, ointments, and specifically herbal treatments.  There is still plenty of overlap.  In Kemetic systems, the Netjer in charge of medical knowledge and application is Thoth.  In both west and eastern African systems, every deity has their specialty as far as healing, but generally, you’ll see most Africans seeking guidance from those three mainly.

As to the specifics of what is going on in the lower torso area in determining what treatment to give, we look to which deities are in charge of which specific organ or issue.  Women’s reproductive organs are under the watch of Yemaya or Olokun, depending on your regional or family tradition.  Urinary functions belong to Olokun and Obatala, because they have to do with salts from the body,water, and cleansing the body of toxins and excess salts, acids, and the like.  Cleansing infections and parasites is under Obatala.  Sexual pleasure belongs to Oshun, and virility to Shango.  Valves and muscular issues belong to Ogun, master of the body’s “machinery”, and so on.

Following basic guidelines and correspondences of the Orishas, it’s easy for the knowledgeable practitioner who has spent some time studying herbalism to figure out what to do.  The next step is to seek mentorship from someone experienced.  Because these practices are so widespread, it is not difficult to find a practitioner, but it may be difficult to find a true expert.  So do some research.

If you’re doing it for mainly spiritual reasons, this doesn’t require much in the way of traditional or conventional medical training, but you do still want to keep a certain health and safety standard.  Practice on yourself and very brave friends or family who won’t sue you if they accidentally kick the pot or something.

Basically, you put a potpourri boiler, an incense burner, or a light on the floor or under a seat with a hole in it.  It should be far enough away not to overheat or burn the person standing or sitting over it.

Generally, if the idea is to cleanse by banishing something, or to add fire elemental energy, one would opt for smoke.  Since ancient Egypt, it is well known that soot is a good antimicrobial for some germs on sensitive flesh.  It was an ingredient in kohl eyeliner.

Because of the soot residue, it is also good if you want to both banish something negative or inappropriate, and leave a nice protective coating behind.  Here are some cases that efin we, smoke baths, are good for.

Followup maintenance in breakups or cleansing the seed.  If a past sexual or romantic connection is creating a blockage that keeps you from forming or maintaining new relationships, smoke it out with herbs and resins that are cleansing, but love friendly, such as cloves, cinnamon, basil, lavender, storax, or frankincense.

Giving a boost to someone whose energy has been drained.  If someone is in recovery from a psychic vampire, or they are a consensual host, they may need an occasional boost.  If they want to be rid of a vampire, you would use “hot” herbs that repel them, such as garlic, sweet paprika, cumin, etc.  If they are a consensual host, you would use ingredients that don’t, like pomegranate flowers, currants, and animal musks.

Preparation for the honeymoon or another meeting for which one will need a lot of charisma and sexual energy.  For this, a bath of cloves, rose, and myrrh smoke are wonderful.  Add some spikenard to make it extra special.

Guiding someone through changes.  When things need to change, and you want positive changes to stick, use a potpourri of vanilla, and sweetgrass, bison grass, or lemon grass.

Enhancing femininity and beauty.  For this, use a steam of cinnamon, cloves, and citrus.  If you need more “glamour”, then add nutmeg or passion fruit with the peels.

Becoming more resourceful and attracting more money and recognizing opportunities.  This is an important feminine skill that does not get enough attention nowadays.  A steam bath of cloves, and mustard or collard greens, fenugreek, and grape leaves is good for this.

Basically, use your knowledge of herbs to craft a proper smoke or steam bath for the situation.

First things first, give offerings to Eshu/your gate keeper and all Orishas/deities you wish to assist your client.  Once you have done this, take some dirt from that place, and put it in consecrated and protected bowl or contained before you turn away from the place.

Then you will want to use your traditions to create a safe and sacred space.  Call to Eshu and ask him to banish any inappropriate energy or spirits from your work area.  If you are outdoors, you may need to arrange Eshu fetishes and jet and obsidian stones around the perimeter.  Indoors or outdoors, you may want to trance mildly so you can see what may be lingering, and know when the space is cleared.

Be aware that the lower torso energy centers are very receptive and vulnerable, so you don’t want to presume that any and all aggressive spirits are bad.  You don’t want to clear any warriors that may be needed there.  It may be difficult to get them back once you banish them.  At the same time, remember that there are more interests in the realms than yours and your clients’.  If you detect any nasties who really are inappropriate/negative hanging about who have managed to learn how to slide under normal protection requests by being somehow naturally justified, you may have to do a bit of warring.

This is the time to dust off the old wand, athame, machete, etc. and chase off the mischievous.  Remember, even though you call Eshu to protect you, he allows what you allow.  So awareness, courage, and determination is important.  Keep your weapon handy during the bath.

Set up your incense burner or potpourri pot.  Put the dirt from the offerings area underneath.  Then step outside the perimeter, and cleanse your client.  This should be with a separate incense burner, or cleansing liquid such as consecrated water, blessed Florida water, using a sacred broom or brush, or some other normal cleansing method.  Once the client is cleansed, invite them into the work area.

They should stand above the censer or potpourri pot.  Call the Orishas/deities you wish to assist your client.  They should stand there until they feel weak in the knees or other signs are given that it is enough, or up to half an hour.  You may get indications that they need more, and this is okay.  Just make sure you brought enough fuel and supplies.

During the bath, stand guard against mischievous spirits and energy that may try to wriggle in.  An open root is a hard thing for some to resist, so stay on alert.  You will definitely want to circle your client a few times.  Remember that you are working in multiple dimensions.  Aside of the “four directions”, there is above and below, out and in, over time, the hyper-cycles, etc.  Let your body move freely.

This will allow your client to focus on their desires and goals.  They should feel spiritually and mentally free.

To help the smoke or steam go where it should, some use a shower curtain, blanket, cape, or long leather coat.   If it gets too hot under there, let them take this off.  They should be as comfortable as possible.

When the ceremony is over, thank the spirits for their presence, and close it.  Let your client rest, and give them some food and drink for recovery.  Don’t hurry them away.  If they need to sleep, let them sleep.

Traditions vary, but this is the basics.  Also, with steam, you can also add crystals and appropriate talismans and charms to the pot.  You can be a bit creative with ingredients, so long as they are suited to the purpose.  If in doubt, do divination.