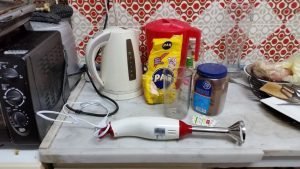 When you want to make a very special offering to some Mesoamerican deities or Oya, chocolate is a good choice.  You can give the raw cocoa beans or nibs, but you can also make a nice drink called xocolatl in the Nahuatl language.  It is basically a creamy, frothy chocolate smoothie that was once only drank by Mesoamerican royalty.

I use a couple of different recipes, the first more traditional, with energy that is specific to enhancing courage, fierceness, decisiveness, and authority.  The second is more about stoking passion and inner fire.

You can make chocolate drinks in many ways, but in order for something to be xocolatl, it must have:

The reason chocolate needs to be there is obvious.  No need to go into that except to mention that it has magical properties that are important and make it as worthy an offering to the deities that we poor humans can muster.  It is indeed one of the best things on Earth, from the health enhancing pulp of its fruit, the cool shade and later fertilization and insulation of the forest floor of its leaves, to the lovely taste of its beans.

Nixtamalized cornmeal is important because corn is eaten and loved by most spirits.  It is ubiquitous throughout Mesoamerican and other Native American cultures, and carries the energy of sustenance.  When it is nixtamalized (processed by being boiled in an alkaline solution), it is more nutritious and creamier.

Vanilla was extremely valued, and also an offering to the deities.  It was even traded as currency.  So its flavor and value made it one of those “best things on Earth”.  As to its magical properties, it is protective and comforting, reminiscent of mothers’ milk.  So it has the energy of being welcomed and embraced by the Earth.  When you try the real Mexican vanilla, you also get that full bodied aroma that contains a slight hint of something like fermentation, or the sweet aspects of the embrace of Death.

The red herb that was used in pre colonial Mesoamerica was annatto.  It adds a reddish color to the mix, and has many good magical properties.  It is protective and acts as a kind of positivity or at least happiness filter of fire elemental energy.  This is important so that a courage or passion trance stays a good trip instead of a bad one.

The hot red pepper was usually chipotle or some other type of red chili.  This adds an excellent push of power and energy.  It also helps to relieve pain after the initial burning.

So to make 5 servings of a somewhat traditional xocolatl, you need:

If you are mixing it by hand, at least start with hot water.  If you are using a blender, the water can be room temperature.

Mix until it’s thick, and then mix it some more to get some air into it.

My alternative recipe is more valiant or heroic love specific, but not necessarily romantic. This is something you would use when you want someone to love or remain loyal against the odds. It’s a good one for whether you are helping to heal a couple on the edge of splitting or boosting morale at work when folks are wondering if it’s worth it to continue. I like offerings and ceremonial drinks to have something to do with what kind of energy I want to draw or radiate.

You will also need a trivet or stand, or your cauldron or pot will need to have legs. You’ll need a shovel or enough bricks or stones to form a kind of a hole.

Call your Gatekeeper, and then dig a hole in the ground. As you do, say the proper things you should to your Earth deity.

Build a small fire or arrange coals so that you can set a pot above it.

Heat your water until it is boiling, and while you wait, add your ingredients to a bowl mindfully.

When your water is boiling, gently and mindfully stir the mixture into the hot water until it is smooth and thick.

Different traditions have different ways of adding more of the appropriate energy to it, but since we owe Mesoamericans from the past, and they and Africans from the present for chocolate, I believe dancing is appropriate. Since you want something to change or turn, I recommend dancing around the liquid for a time. At least make a complete circle. This is the time to express the emotion you have about the situation.  It really helps to maintain your calm outside the ceremony if you let it out in the ceremony…if you can.

If you don’t have privacy or are doing this for people who would not be understanding of the reality of the spiritual aspects of it, mix your ingredients ahead of time, and give a part of it to your Gatekeeper. Your Gatekeeper is there partly to deal with imperfect circumstances and balance them. This doesn’t mean you can just do whatever. You have to do what you can with what you have. He/She knows if you aren’t giving your best.

When you are done, close the ceremony if you have to then go take the chocolate to non understanding folks. If you are with understanding people, then you may invite them to drink and dance. Encourage them to get fired up and express their loving emotions through movement.

Close the ceremony when everyone is either calmed down or paired off and somewhere with someone in the darkness beyond the ceremonial area. 😉

Webmaster at Zindoki.com
Sheloya (Sis. Nicole) is a licensed U.L.C. Modesto minister, spiritual counselor, and sorceress.She believes in education and empowerment of individuals with a holistic approach to spirituality.
Order a bone reading from Sheloya to find out what the Spirits have to say about your future.

Latest posts by Sheloya (see all)