Cleopatra Oil Recipe for the Seduction of High Status Men 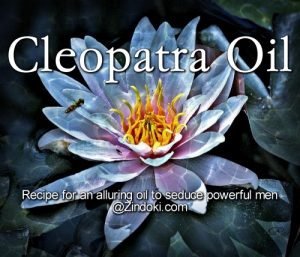 Cleopatra oil is a recipe for use by high status women to seduce high status men.  If you are hormonally male, you may want to make some adjustment to it because you already make your own musk and may want to add sweetness or fruitiness by adding lemon or oranges, but generally, this recipe works for both men and women.

Queen Esther oil is good for women who are not so confident and powerful in the worldly sense, who need to seduce higher status, more wealthy men for commitment.  Cleopatra oil is for the woman who is already high status, wealthy, a matriarch, or very dominant, and needs to come from the position of making alliances rather than proving worthiness.

It also produces the effect my ile’s Queen Arden calls “the white ankle”, on men you may not consider worthy of your commitment, but would like for amusement, or submissive men you want to keep and inspire to be useful as more than scratching posts.  It seduces them while keeping them in their place.

Used in combination with Queen Bee oil, keeping the ways of Oshun, and good management skills, Cleopatra Oil is a good helper in making people enjoy serving and pleasing you.

There are many recipes published for Cleopatra oil.  It is famous in Hoodoo and New Orleans Voodoo.  However, my recipe is very different.  I like to use the ingredients than Cleopatra VIII would probably have actually used.

After giving offerings to your Gate Keeper and Auset, arrange your ingredients and light some myrrh incense.

Let some smoke get into the jar.

Mindfully, tie the ingredients into a cheesecloth, and put the packet into your jar.

Warm your oil so that it is very warm but not yet smoking.  It should only be very warm or else you may explode your jar.  Dip a spoon into it, and if the spoon is too hot to touch for a second, it is still too hot.  It should be so that you can barely touch the spoon, but you can touch it.

Pour the warm oil into the jar.  Do this very carefully.

Give the lid some smoke, and then close the jar while it is still warm.

Cover the jar with the cloth and allow it to cool.  Once it is cool, let it set for 3 months.

After three months, open the jar, and poke at the herbs or packet of herbs to squish out some of the stuff that has “brewed” there.  Then close it again for another month.  Do the squishing again, and then give it one more month.

After 5 months, it is ready to use.

How to Use Cleopatra Oil

It can be worn as a perfume, and also used to dress candles or burn in an oil burner for love spells.