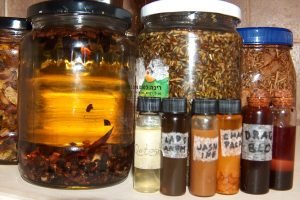 Eshu oil is one of those simple, basic recipes that every witch delving into west African spirituality and magick must have in their toolkit.  It is relatively easy to make with a little patience.  A standard recipe often used in the African diaspora is as follows:

On a Monday, gather the ingredients together before you do your offerings, and put them on a plate.  You will need:

While your altar incense is burning, and after you have opened the ceremony, ask Eshu/Elegua to bless your oil.  Then put the dry ingredients in the jar, and fill it with the oil.  Cover it tightly, and give it a good shake.

Keep it in a cool, dark place for at least three months before use.

Notice that this is an infusion oil, meaning the oil takes on the scent and some other particles of the ingredients over time.  It is made this way because in the past, most practitioners didn’t have access to essential oils easily.  Scents had to be extracted by hand.

A modern essential oil version may have

It will be ready to use right after consecration.

It should be noted that nicotine is toxic on the skin, and can leech through the skin into the bloodstream.  If you will be adding Eshu oil to other oils that are to be worn on the body or put in food, leave out the nicotine and tobacco.  Vanilla is an excellent substitute, as it is also very protective, stimulating, and aromatic.  Tonka beans can also be used, but this will change it from a general Eshu oil to a wishing or road opener specific Eshu oil.  One could simply not use any tobacco or substitutes for its ashe/energy in it, since originally, tobacco was not used in the Yoruba tradition.  Some there would even say that it would be offensive.  Opinions vary.

Also, in a pinch, if you are short on time or supplies, you can consecrate some red palm oil or coconut oil by giving the first dose to your home or outdoor Eshu.

Because Eshu was given the power to multiply himself, there are many variations on Eshu oil that are used for various purposes.  This is important for many reasons, not the least of which is bringing together deities, spirits, and alter-dimensional beings from pantheons from varying ethnicities to work on the same case.  It is also a good thing in cases wherein you may not be absolutely sure what sort of energies you are dealing with, and don’t have time to find out.

You can view Eshu oils as umbrellas.  The general oil would be a multipurpose umbrella that would, metaphorically, handle most stuff that falls from the sky normally.  Another oil would be more of a parasol that protected from sun and radiation.  Another may be a sturdy shelter with a roof that blocks balls of hail.  Another would be the tiny umbrella that makes a drink more appealing and likely to be consumed.

One must also remember that Eshu is a trickster.  If you are too general, the results may not come about in the way you hoped they would.  As much as he blessed us, he can confuse us.  So crafting an oil or other Eshu related item to be more specific is confirmation that we know what it is that we want to happen, and can handle the consequences.

So you have the general recipe, but what if you want an oil that will enhance your luck?

An infusion recipe may contain:

Before you start, give Eshu three pieces of the same candy, and make a deal that if it works well and consistently, you will give Eshu the candy at the bottom.  If it has melted by then, then just leave the open jar with the leavings at a crossroads.  This should steep in a cool, dry place for 3 months.

A modern oil may contain:

Make sure to make the same deal with Eshu, with a pinch of sugar.

You would use three drops of Eshu Luck oil on your hands when gambling, playing the lotto, or when doing competitive sports.  If you play football, after rubbing it into your hands, smack your thighs three times.

Eshu is a trickster, but he’s also a protector.  He sometimes puts things in our path to prevent harm.  He is an excellent protector in chaotic times when we can’t always see things clearly.  While we are confused, he is calm because he can see all directions at once.

There is no way around this but infusion because it needs to have been protected for awhile, to take on the energy of protection.  I would normally just add protective ingredients to general Eshu oil, but if you want to make it specific from scratch, do so.

Consecrate and keep in a cool, dark place for three months, and treat it very well.  You may want to dress up the bottle a bit, and add a piece of jet, which is a very protective stone, to lend its energy.

Related articles across the web