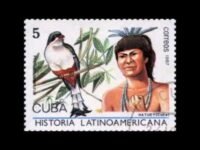 For over a decade, Hatuey led the Tiano people into combat against the Spanish to defend their freedom. Around 1511, Hatuey and four hundred of his Taino Freedom Fighters traveled to Cuba on a mission to mobilize the people of Cuba against the Spanish. He warned the Cuban leaders about…

From BuzzFeed On Facebook Invisible vampiric ghosts and witches without skin are a haunting part of a uniquely African-American culture in the Southeast United States. Join James Troup as he examines Haints & Boo Hags in Gullah culture and what methods were used to protect against them.

Medicinal plants have been used to prevent and treat various health problems. Several African and Asian nations are now encouraging traditional medicines as an internal component of their public healthcare programmes. Indigenous medicines are relatively inexpensive and locally available and readily accepted by local population. Ethiopia has an enormous resource of plant species that are used in traditional medicine. Among the 7,000 higher plant species that are known to exist, about 800 of them are employed in the traditional healthcare and 60% of pants are said to be indigenous with their healing potential. Majority of Ethiopians depend on medicinal plants as their only source of healthcare. Vast knowledge on the traditional uses of these plants is not fully documented and most of the knowledge is conveyed from one generation to the text generation through words of mouth. The survey conducted during February-May 2006 was undertaken to explore the traditional systems of medicine in Asendabo region of Ethiopia.

Florida water is a traditional scent blend of unisex perfume, or more correctly, an eau de toilette. When one blends notes of citrus, lavender and a spice like cinnamon and/or clove, one has blended “Florida Water.” At one time, there was no one correct formula for this scent. It was…